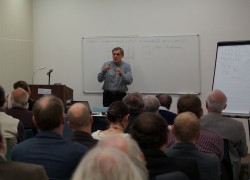 We study general mathematical questions concerning complex systems. We deal with problems of a collective behaviour of systems composed of many microcomponents as well as dynamics of exact arithmetic algorithms which compute with an arbitrary precision. In the limit of large stochastic systems, collective phenomena are occuring with components creating ordered macroscopic structures. Be it a phase coexistence with a metastable dynamics or apparently abstract mathematical problems concerning a random colouring of graphs or an emergence of large cycles in random permutations, a crucial role is played by threshold phenomena with a small change of parameters triggering a dramatic change in the macroscopic behaviour. A computation of an arithmetic agorithm is a dynamical process with a growth of the complexity of their state structures. The speed of convergence of the algorithm depends on the growth of the complexity. The aim is to create an effective representation of real numbers with an arbitrary precision as an alternative to the current representation with floating point.

Mathematical physicist. He is interested in physics and mathematics of phase transitions.